Today, We Buy a Blue Dress! 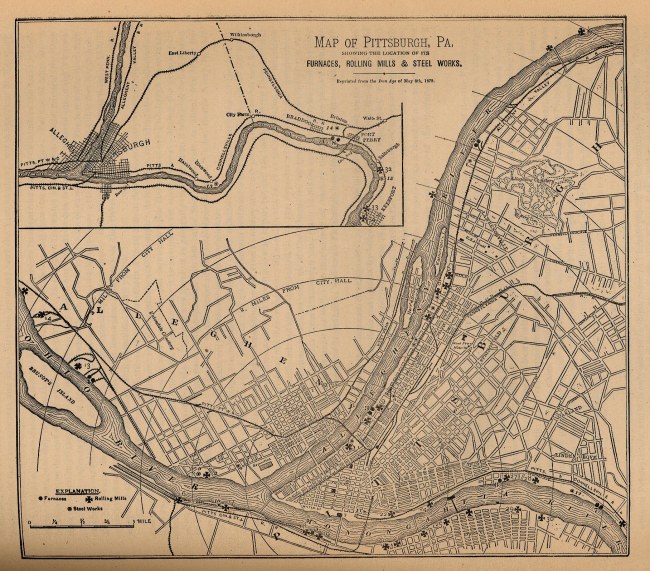 Among the many things that bugged me about Pittsburgh when we moved here in 2001 is that it’s nearly impossible to find your way around unless you were born in it.  For instance, the way a Pittsburgher gives directions is to use landmarks that no longer exist (Turn right where the Isaly’s used to be), or names for roads that don’t actually appear on any signs (Yinz are gonna wanna take the Pahkway dahntahn).  Major thoroughfares (I’m talking about you, Forbes) inexplicably turn into one-way streets, the wrong way. The city pretends that it is divided up into named towns (Squirrel Hill; Bloomfield; East Liberty) that exist not on maps but in the city’s collective memory of the ethnic groupings of its neighborhoods (Jews; Italians; Blacks). Worse, even GPS technology tends to fail within the city limits; once, mine actually directed me to drive down a flight of stairs at the end of a road (and, because I am a rule-follower, I very nearly did).

One theory for why it’s so screwy here is that as Pittsburgh was being built up, the smog from the steel factories was so dense that the city engineers (who were maybe also often drunk) designed streets based on what they could see (which wasn’t much), sometimes forgetting that there tended to be a river where they wanted to put a road.  So they ordered the construction of highways and byways that made no sense (example: the exit onto 376 [a.k.a. “the parkway”] that involves coming to a complete stop, then playing chicken across three lanes of traffic that are all trying to exit to avoid the Squirrel Hill tunnel, which is probably closed), or changed the name of a street in the middle of the street, because it was too smoggy to see that it was still the same street (example: Forward Avenue, which becomes, descriptively but confoundedly for the GPS, Serpentine Road).

What does this have to do with buying a wedding dress, you ask?

Contrary to what I think you’re suggesting, I am NOT just trying to drag this topic out for as long as I possibly can, to build up what we in the writing business call “suspense” (or, as you in the reading business call it, “irritation”).  I am simply trying to explain why it is that my Pittsburgh shopping trips have been limited to places I can walk to, or to places that I have driven to and returned from without having to call a friend or pull over to weep.

(Okay, that’s a lie: I often have to call a friend or pull over to weep.  But not always because I’m lost.)

Thus, having exhausted all the walking-to possibilities (the pink-haired lady’s boutique), as well as all the walking-to possibilities we wouldn’t be caught dead walking to (the boutique where they were bitchy to me eleven years ago), those of us who are still hunting for the not-quite perfect wedding dress are now left with only a couple of choices: the newly opened Bakery Square shopping center (which is where the Cachina Drapery Factory used to be) and the Ross Park Mall, which you get to by going out Bigelow and then exiting on 6th St. dahntahn, then taking a left turn onto a street that ends where the Melon Arena used to be, getting in the leftmost lane to turn onto the part of the Vet’s bridge that they never completed, to go back over Bigelow and onto, umm, I think 279.  Take the McNight Road exit and get into a traffic jam that should last about forty-five minutes, unless it’s raining, and then don’t take the Ross Park Mall entrance that’s marked “Ross Park Mall Entrance,” since that will actually wind around a road and then not bother to tell you to take a right, and you’ll end up back on McNight.  Instead, take the unmarked entrance across the street from where the Goodwill used to be, and Bob’s your Uncle.

Oh, you didn’t want an uncle?  You wanted a dress?

Then it’s settled: we’ll drive five hours to Philly, to the King of Prussia Mall, instead!

And because it’s your fiance’s birthday, and his family lives in Philly, why not take him and a handful of those helpful teenagers one finds in one’s house these days (let’s call them “Daniel,” “Maddie,” and “Sami,” whether or not these are actually their names.  If they start to get all twisty, we will also call them “Serpentine”).

Yay, this is gonna be so much fun!  Did everyone remember to pee?

I don’t care if you don’t think you need to.  And no, you can’t have shotgun.

Now hurry up and pee, or we’re never going to finish this blog in time.

Tomorrow: is Friday.  Maybe we’ll find out about the blue dress on Friday.