Finding the Imperfect Dress for Your Mid-Life Wedding 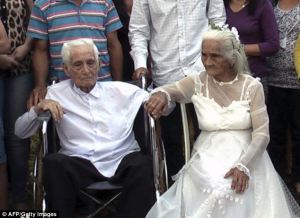 I know what you’re thinking. You’re thinking: Mid-Life?  Does she really think she’s going to make it to 102? Listen, if you don’t have anything nice to think, then stop thinking it in italics, so I’m less likely to notice it in a block of text.

Anyway, today’s topic is an important one, and so complex that it will take me two posts to completely explain it, so how about we just skip the preliminaries and get straight to the advice. I know there are plenty of women like me out there who want to find the not-exactly-flattering-or-well-fitting dress to wear on the second (or third, or fourth; I’m not going to get all judge-y or anything, but if you’re going on your fifth wedding or more, you might consider recycling. Think of the planet!) most special day of their lives (if you don’t count all the rest of the really important and meaningful stuff that happens in a life, like getting carded in your forties, or the first time you ate fromage blanc).

WHAT DID I JUST SAY ABOUT THAT?

Oh, sorry: for a minute there, I thought you were thinking again. But no, that was me. Let’s move on.

So you’re getting married again! Mazel tov! And now that you’re all grown up and your parents are dead and your arms are dotted with liver spots, you know way better than to hop in the car and drive on over to David’s Bridal or its ilk, where every single item in the store will make you look either delusional or poofy or both, am I right? Plus, if you’re anything like me, then you’re not the type of person who can happily spend more than a hundred dollars or so on a dress (unless you’ve been invited to a swanky party, in which case, you won’t end up wearing the dress anyway, because it’s too damn hot for sleeves).  A hundred dollars won’t get you much more at David’s Bridal than panties with the word “Bride” spelled out in rhinestones on the back. You could pay $500, $1,000, even $10,000 there (honestly, I have no idea, because I’ve never been), and you could still end up looking stupid!

But here’s the thing: you’re old now! You don’t have to wear a bridal gown at all! Instead, you could buy something that might actually look good on you, in a real-world kind of way! And because you’re not buying an actual bridal gown, you can feel all self-congratulatory about spending anything up to what you might have paid had you bought an actual bridal gown. Think about it: even though you were super-thrifty with the first wedding and bought your gown on sale, it was still almost $400 a million years ago (which is like, maybe $1,000 now?), so you could even charge right into e.b. pepper on Walnut street and try on whatever you wanted without once looking at a single price tag (but you won’t, because they’ve been really bitchy to you there).

Until you get to the part where you have to pick out the dress.

Because it could be anything. Any color (except white, because it’s a cliche and it highlights your liver spots, or black, because, if you believe in nothing else, you believe in bad luck). Any shape. Any length. Any material. Any season, even, because you’re getting married at the end of September, when the weather in Pittsburgh is as close to perfect as it’s likely to get the entire year.

Are you beginning to feel the pressure? I can’t tell, because you’ve stopped sharing your thoughts with me. Why have you stopped sharing your thoughts with me? Do I frighten you? Did you not read the part about “Cranky” in my blog’s subtitle? Okay, I promise that the next time you think to me, I’m not going to be upset. Really. I’m just going to shrug off any negative feelings I might have in response to your thoughts, and just sort of validate them and stuff. Okay?

Good. So let’s say that you are beginning to feel the pressure. Let’s say that, now that you think about it, and now that you’ve strolled past a shop window or two, and pulled up 276 images when you clicked on the Dresses link at Nordstrom.com, the thought of NOT shopping at David’s Bridal is suddenly not so much freeing as daunting: instead of having to choose the least offensive dress from a finite number of offensive dresses, you have to choose the most flattering and stylish and funky (yet classy!) and still vaguely sexy dress from all the dresses everywhere, including the past, thanks to eBay and vintage stores.

Clearly, you’re going to need some help. Lucky for you, if you’re anything like me, you have some help right there with you in the house, help that you, for lack of a better term, made. That’s right: you have a couple of teenaged girls. Yours, if they are anything like mine, and I believe they are, are 16 and 14; for the sake of privacy, we’ll call them “Maddie” and “Sami.”

But those are their real names.

Excellent point! I could see why you would think that! But technically, no, those are not their real names. Those are their real nicknames. Besides, I often call one by the other’s, by mistake (they both have brown hair), so there’s no way you’re going to know for certain which one I’m talking about. In fact, one of them has taken to shouting “My name is Sami,” at me before I’ve even had a chance to misidentify her. (I won’t tell you which one, though, because of the respecting of privacy thing.)

Are we getting to the point yet?

Ha ha! I love your funny thoughts. If I had a penny, I would totally give it you. For the thoughts.

Seriously? No. We are going to have to finish this tomorrow. I’m not going to say it’s your fault, because of all the interruptions, but as I was telling “Maddie” the other day, I think it’s important that we all start taking responsibility for our actions. Or maybe I was saying that to her brother, “Daniel” (which is totally NOT his real nickname). Anyway, I have to go pick all of them up now, whoever they are.

Tune in tomorrow to learn how to buy three whole dresses for your wedding and not have any of them actually fit!

Tomorrow?  I think I have a thing tomorrow.

*But possibly only in this regard.